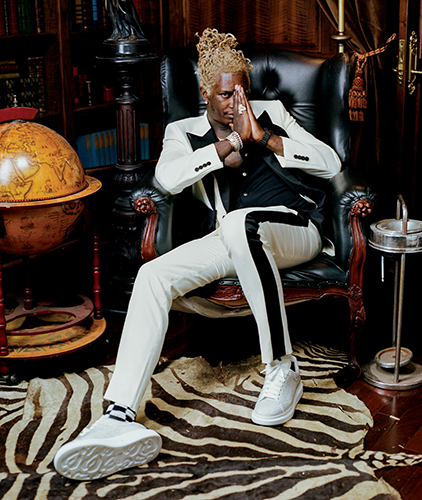 Recognized worldwide as the godfather of new wave rap, Young Thug has broken convention at every single turn and reinvented the sound of popular music; his Grammy award-winning, platinum-selling records have paved the way for generations beyond him. In 2020, he achieved fourteen Billboard charting hits with no album release and in addition to producing singles and albums from the Young Stoner Life Records artist roster, of which he is the Founder and CEO. Thug has had an undeniable impact on Hip Hop music with groundbreaking projects like Slime Season, Barter 6, Slime Season 2, Slime Season 3, Jeffery, and more. It is his dynamic lyricism and genre-defying sound that have cemented each of his projects as cultural game-changers. His most recent album So Much Fun (2019) went #1 on the Billboard 200 chart and featured the GRAMMY-nominated track “The London” ft. J.Cole and Travis Scott. That same year, Thug graced the GRAMMY stage with Camila Cabello for their chart-topping single “Havana”. The previous year, in 2018, Thug also took home the GRAMMY for his work on Childish Gambino’s “This Is America''. Over the span of his incredible career thus far, Young Thug has garnered 24 Gold and Platinum RIAA certifications, headlined countless music festivals, and embarked on groundbreaking tours like The Justin Bieber Big Tour (2019), which also featured fellow YSL artists Strick, T-Shyne, and Duke.

In addition to his musical legacy, Young Thug’s visual identity is iconic. From the unforgettable Alessandro Trincone dress Thug wore on the cover of his award-winning album, ‘Jeffrey’, through to his clothing brand ‘Spider’, and magazine covers for the likes of Arena Homme+, Dazed, Interview Magazine and V Magazine. Thug has worked with photographers including Juergen Teller, Tyrone LeBon, and Petra Collins and collaborated with brands including Calvin Klein and Adidas.

Now in 2021, Young Thug leads the charge as a certified cultural tycoon. In addition to his own entrepreneurial endeavors, Thug continues to challenge and redefine the boundaries of culture in his vision of the future. Striking the match for 2021 and illustrating his penchant for sonic curation, Thug releases the highly anticipated Slime Language 2 featuring a blend of artists from his Young Stoner Life Records label roster alongside frequent collaborators and some of the rap genre’s biggest stars.