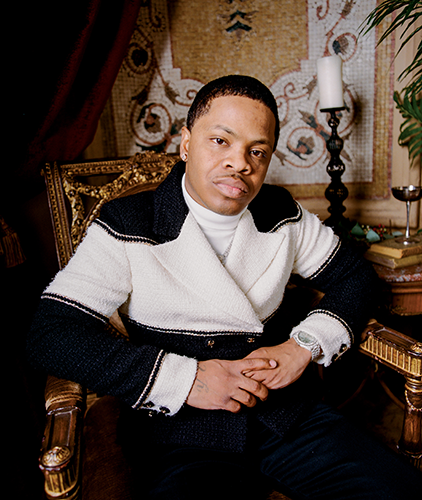 Quintavis Grier, known by many as Unfoonk, is making waves out of his hometown of Atlanta, Georgia. You could say Hip Hop has always been in his blood, as he is the older brother of Young Stoner Life Records founder Young Thug, but growing up Unfoonk knew from as early as ten years old that being a rapper was in his future.

Unfoonk’s journey in Hip Hop began in his early teen years; crediting Young Money/Cash Money and Andre 3000 as his inspirations. When describing his sound Unfoonk refers to it as “pain music” because of his ability to embed storytelling into his lyrics and his commitment to making his music relatable. Upon his release from prison in 2019, Unfoonk decided to put his all into his rap career. When first signing his record deal, Unfoonk’s brother (Young Thug) gave him advice that stuck with him telling him to continue to “feed your mind”. Taking that advice to heart, even though Unfoonk used his time in prison to write music he used his release to start fresh creating all new songs from a fresh perspective. He became enamored by the opportunity to perform seeing his brother and other YSL members (including his sisters Dolly and HiDoraah) performing in front of thousands of people and decided he was going to give music his all.

In 2019, Unfoonk released his first mixtape On the Way followed by the release of 11 Years No Tears in 2020 which houses his popular street anthem “Mob Ties” featuring 24 Heavy and Slime Life Shawty which racked up millions of views on Youtube. The tape also featured appearances from Lil Keed, Yak Gotti, Yung Mal, and more. Unfoonk also makes appearances on the Young Stoner Life Records compilation album Slime Language 2 with stand out track “Real”.

As Unfoonk prepares for the release of his next project, My Pain he plans to provide listeners with more about his story as he continues to develop his sound. One thing for sure, Unfoonk is determined to make his family proud and connect with his fans in the most meaningful way -- through his music.