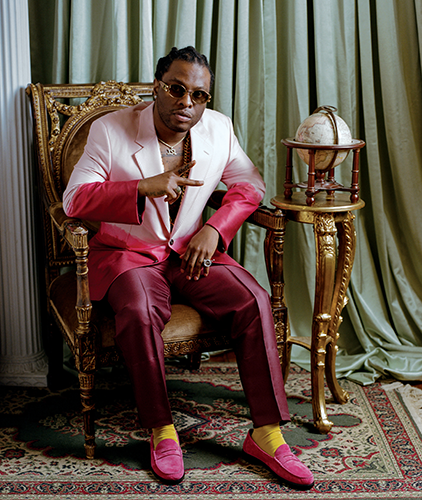 Strick is a robust and multifaceted recording artist hailing from North Carolina, currently splitting his time between Los Angeles and Las Vegas. Best known for his skills as a clever wordsmith and adept songwriter, Strick has garnered a reputation for his ability to tap in to his diverse professional background - both in business and in the U.S. Air Force, which elevates both his business acumen and creative output alike.

After relocating to Atlanta in 2012 and founding his own branding agency for aspiring musicians Foundation 86, Strick moved to Los Angeles to pursue his own career as an artist. He then landed his first official placement on Kanye West and Juicy J’s "Ballin','' leading him to work with artists such as Travis Scott, Jeremih, K. Michelle and Wiz Khalifa. In 2016, Strick earned his first platinum record with "coordinate" off of Scott's Birds in the Trap Sing McKnight album, further igniting his hunger to continue developing his skills as a songwriter. Soon after, he went on to join Young Thug on several tours, including the Hi-Tunes Tour (2016), Hi Horse’D Tour (2017) the K.O.D Tour with J. Cole (2018), and the Justin Beiber Big Tour alongside Machine Gun Kelly (2019).

On the 2018 Young Stoner Life compilation album Slime Language, Strick assists Young Thug on “STS”, a track that combines his signature soulful delivery with Thug’s unique sound and has garnered millions of streams. In 2019, Strick then went on to release his label debut album See You When I Land, a project that showcased his ability for creating songs with deeper meaning that don't sacrifice their radio replay value. His latest releases The Machine Vol.1 and The Machine Vol.2 are projects that truly embody Stricks’ work ethic and illustrate his journey from the hood to affluence.

With his more recent releases, like his single “Yatch Club” featuring Young Thug & Ty Dolla $ign, along with his appearance on the second Young Stoner Life Records compilation album Slime Language II, Strick continues to propel himself to the forefront of the ever-evolving hip-hop landscape.