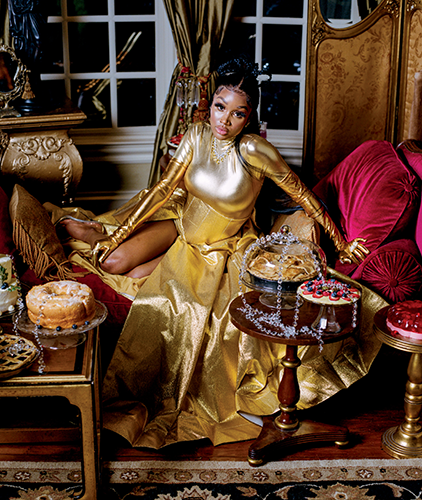 Born in North Carolina and raised in Georgia, Karlae is a prototype for today’s female rappers. An entrepreneur, model, and influencer, Karlae reflects a new generation of musicians uninterested in labels or limitations. Much like Atlanta’s finest, Karlae’s music is refreshingly raw and provides a high-energy soundtrack for confident, unapologetic women. Rising to fame in 2014, Karlae cultivated a substantial audience across social media platforms. Utilizing Instagram early on, known widely for her sartorial choices and beauty regimens, she swiftly leveraged her likeness and interests into a viable brand. In the summer of the same year, she founded Karlae Swimwear, a line of moderately-priced beachwear that instantly solidified Karlae as a businesswomen. After sharing samples of her poems to a friend in A&R, Karlae was encouraged to pursue music. She re-worked her poetry into songs, soon booking studio time. Music was an organic pivot, one informed by her teenage years. As a teenager, Karlae assisted her mother on photoshoots, recording sessions, and at concerts in Atlanta. The city shaped her, both as a woman and a musician. Karlae is the first female artist to be signed to Young Thug’s Young Stoner Life Records and she has truly earned the title of the labels ‘First Lady’. She’s a stream of conscious storyteller with a coarse, gravelly voice that bends a breakneck speed. With beats oscillating between experimental trap and Drip, she is known as the Queen of Slime.

“Outside lookin’ in, there is no comparison,”, she beings on 2018’s indomitable “U Ain’t Slime Enough.” The song, a collaboration with Young Thug and Lil Duke, set the bar high and created a movement. On “RIXH” featuring Rich The Kid, she challenges gender essentialism and shreds male egos. Her 2019 single “Shut Up And Listen” featuring Lil Duke, showcases Karlae’s full-fledge artistry. It’s her latest single “Jimmy Choo'', however, that truly adds fire and flare to her discography. In this collaboration with labelmates Young Thug and Gunna, Karlae brags about the finer things in life and boasts like a rap star ready to take over. On the Young Stoner Life Records compilation album, Slime Language 2, Karlae returns with her braggadocious bars and new perspective proving that in an era ripe with female-centered narratives, Karlae’s raw stories deserve to be heard.