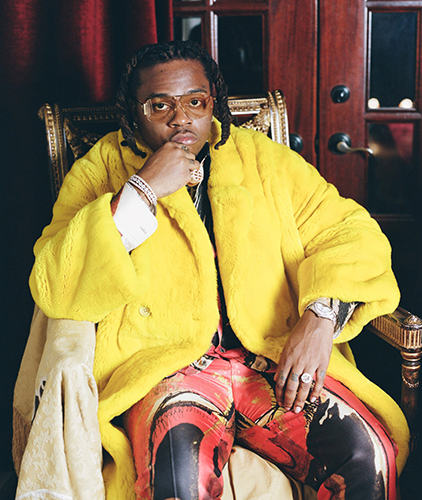 In the past four years since Drip Season dropped, Sergio Kitchens, better known as Gunna, has redefined the meaning behind “drip” and turned it into a lifestyle. Take a look at the current landscape of hip-hop and you’ll find traces of Gunna’s influence, where his sound and fashion sense have been imitated by the next generation. As one of the public faces of contemporary Atlanta rap, the 27-year-old artist has made his lane clear: he’s the “drip influencer,” someone who sprinkles drip seasoning to make all your songs bang.

Born and raised in College Park, GA, and signed to Young Stoner Life Records, he famously teamed up with label boss Young Thug and Travis Scott on “Floyd Mayweather” from 2016’s Jeffery. Shortly after, he dropped the seminal mixtape Drip Season. 2017 saw him serve up the sequel Drip Season 2 and Drip or Drown. He ascended to superstardom during 2018. Drip Season 3 put up unbelievable numbers, earned Drake’s fandom, and garnered looks from Rolling Stone, GQ, Vogue, Complex, and more. Not to mention, he joined forces with frequent collaborator Lil Baby for the collaborative Drip Harder, which bowed at #4 on the Billboard Top 200. The project yielded the platinum Billboard Hot 100 Top 10 hit “Drip Too Hard” and gold “Never Recover” [with Drake] and earned him Gunna first GRAMMY nomination. He teamed up with Travis Scott and NAV for the ASTROWORLD favorite “Yosemite,” Mariah Carey for “Stay Long Love You,” and Metro Boomin for “Space Cadet,” which they performed on Jimmy Kimmel LIVE! and The Tonight Show Starring Jimmy Fallon.

Each album has demonstrated Gunna is a one of one, utilizing rapping and harmonizing to create signature vibes that feel effortless. On May 22 2020, Gunna celebrated Gemini season with his sophomore album, Wunna, which presented a new nickname and his connection with astrology, as depicted in the artwork that references Leonardo da Vinci’s The Vitruvian Man and Gunna’s natal chart. “Wunna is my alter ego. I feel like because I am a Gemini, people always tell me like ‘you’re two people. You act like one person. You act like this person’ I kind of tapped in and kind of realized I do be like another person sometimes,” he says. “My peers started to call me Gunna Wunna. Sometimes it just be Wunna. I feel like Wunna must be my alter ego.” Shortly followed by a deluxe version, WUNNA debuted at #1 on the Billboard Hot 200 and earned RIAA certifications for songs like “Skybox” and “Dollaz On My Head”. As the rap superstar gears up for his next project, you can also find him on the Young Stoner Life compilation album Slime Language 2.